The “Golden Ratio” has been a key concept in art and science since ancient times. But is it also applicable to the audio world? DIG and Volante both offer a “Golden Ratio” setting for their sync mode and tape head spacing respectively. Our friends All Access from Japan asked Strymon sound designer Pete Celi about the application of this “Golden Ratio” setting.

[Pete]
The Golden Ratio creates the fastest-building density of delay repeats. With high repeats, the regenerating echoes are spaced in a way that maintains this non-overlapping relationship so there is no discernible rhythm or repeating pattern created in the echo repeats. This means that it creates the quickest transition to a reverberant sound where individual repeats give way to a sustained wash of dense echoes.

[All Access]
Volante features four play heads (delay times) and individual feedback for each with a Golden Ratio setting. Is it the case that Volante can make more complicated sounds than DIG?

[Pete]
They take different approaches to creating complex delay sounds. DIG has unique ways to configure two delays, which can also be synced in time or free running. Volante uses a multi-head configuration with flexible head spacing. Each can do things the other can't, but each can go from simple straight delays to very complex and ambient sounds.

[All Access]
When you use Volante, do you prefer the Golden or Silver Ratio? How do they differ?

[Pete]
The Silver Ratio is a geometric spacing that aligns the heads in a way where the time delay between heads gets successively smaller. This gives an effect of the repeats 'bunching up' towards the quarter-note delay time. This gives a profile that is not quite as diffuse initially, but it does leave a bit more separation between the dry signal and the onset of delay repeats. This can be nice if you are playing single notes and you want a little space after the notes. It all depends on what you are after. That's one of the things that is great about Volante. Lots of possibilities to dial in a unique and musical sound.


The ratio is also an important part of setting delay times when ‘playing back to’ delays to create rhythmic sync effects. So we asked one of Strymon's blog writers, Gohan, to share his synchronizing ideas & techniques.

[All Access]
We have delved into the “Golden Ratio” concept, we’d also like to ask you how to set up subdivisions on two DIG delays to create a groove? Are there any particular demos on the DIG section at www.strymon.net that might provide ideas to get started?

[Gohan]
Using DIG's two delays in Sync mode gives you a great place to start experimenting with using the two delays for creating musical grooves. â¨â¨Since Delay 2 is synchronized with Delay 1 in this configuration, Delay 2 will always be in time with Delay 1.

You have 5 possible subdivisions to choose from: triplet eighth note, eighth note, a 'golden ratio' subdivision, a dotted eighth note, and a dotted quarter note. â¨â¨Subdivisions like triplet eighth and dotted eighth are great for making interesting rhythmic grooves as they are shorter than the quarter note delay and will nicely fill in gaps in your playing, and also do not overlap with the quarter note much, so they stand out.â¨â¨I personally find that setting DIG's delays to Series Configuration makes for more rhythmic delays, as Delay 2 is feeding into Delay 1.

We have a lot of great videos on our DIG product page that highlight DIG's 3 different delay types, as well as some of the different rhythms you can achieve with two delays. Keep in mind that the configuration of DIG's two delays also plays a big part in the creating more rhythmic delays.

[All Access]
What are the best delay settings to achieve “ahead of the beat”/“behind the beat” type grooves? How about for “shuffle” or “1/2 time shuffle” grooves? Which settings are best when playing rhythmically back to a delay signal in the style of U2’s guitarist The Edge?

[Gohan]
For getting 'behind the beat'/'ahead of the beat' type grooves, it's really all about your delay time. You can use Delay 2 in Sync Mode to get it in time with your Delay 1, and then use the TIME knob to carefully dial the delay time off beat just a little bit. This will help keep whatever rhythmic delay you have going on in time with itself but out of time with the beat.

I had a harder time dialing up a shuffle groove, just because there's not a way to really get that effect via the Sync Mode, but you can use Free Mode so that the delay times for Delay 1 and Delay 2 are independent. â¨â¨This will make it so that you can get whatever timing you want between the 2 delays, and makes for some creative rhythms!

As for getting those iconic U2 delay sounds, the secret to those tones is using a dotted eighth delay and an eighth note delay running in parallel. From there, you can adjust things like your mix and repeats to taste, but as long as you have those two subdivisions, you can cover a lot of classic U2 tones. On DIG, you'll want to set the Delay 1 subdivision secondary function to Dotted Eighth, and you'll then want to set Delay 2's delay time to eighth note. Make sure that the two delays are synced. From there, you'll also want to set their Config secondary function to Parallel as well. 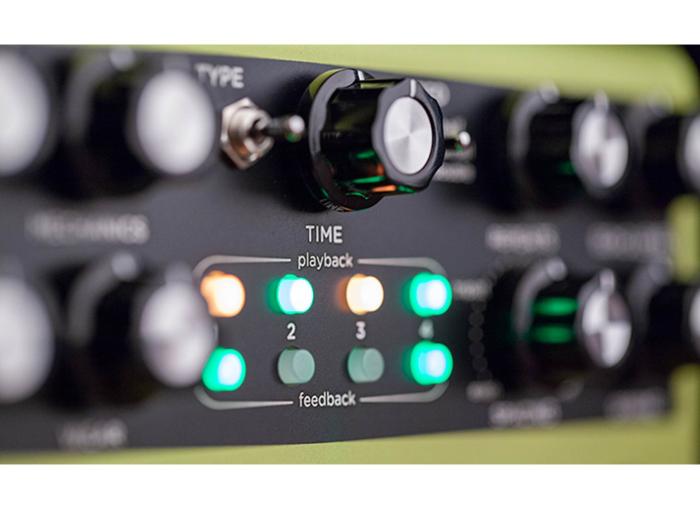