You’d be hard pressed not to have encountered James Bay’s music over the last year. He won the coveted BRITs “Critics Choice” award in 2015 (previously won by Florence and the Machine, Adele and Sam Smith) and he has dominated playlists with hits such as “Let it go” and “Hold back the River”. His debut album “Chaos and the Calm” went straight to number 1 in the UK charts and number 15 in the notoriously inaccessible US charts. So we were delighted when James’ crew got in touch with us to talk about Strymon Flint and BigSky.

James has come a long way from noodling around on guitar in his home town of Hitchin. Having been stylistically inspired by guitar greats such as Clapton and Springsteen along with songwriting influences including Michael Jackson, The Stones and Motown, he took to YouTube to hone his technique:

“I was more interested in just trying to listen and play by ear. I didn’t have the patience for any kind of tabs or any kind of music….So YouTube opened up this world of guitarists offering tips, being able to look at old videos of Stevie Ray Vaughan it all came to life for me.”

After moving to Brighton to study fine art, he quickly switched to music and focused his energy on the live music scene rather than academia. Before long he was making the journey up to London to perform, and one such occasion changed things dramatically. A fan uploaded a video of a performance in North London’s Kentish Town which later found its way to an A&R Exec from Republica records (the label that had previously signed Ben Howard, Florence And The Machine, James Blake and Lorde). They added James to their rosta which led to a last minute BBC Radio One Live Lounge session when Lana Del Ray dropped out, and when he played “Let it go” it was the top trending hashtag on Twitter that evening. It later hit the iTunes top ten and the single reach #1 on the worldwide Shazam chart.

James recorded his first studio album in Nashville’s legendary Blackbird Studios with Tom Waits and Kings of Leon engineer Jacquire King. The result of this was "Chaos and the Calm” in early 2015. He has a largely sold out UK tour throughout September and October and will be touring the U.S for the remainder of the year. For information about tickets visit Jamesbay.com. 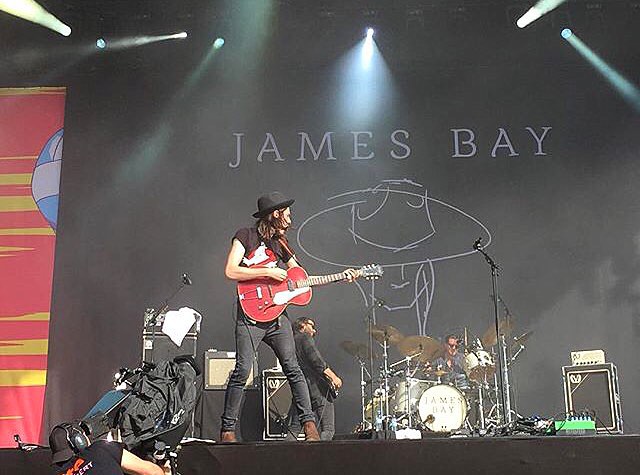