A few weeks back the Musicpsych team was fortunate enough to be contacted by Ryan Robinson. He is a session player, solo performer and also a composer creating music for a variety of media. Ryan is currently guitarist with Nick Heyward (former front man of 80’s New Waver’s Haircut 100) and had hit us up to say he was working with some of Hotone’s stomp boxes for a string of festival gigs over the summer, as well as taking the time out to create some demo videos of the “Komp”, “Choir” and “Verb” in action.

We took the opportunity to ask Ryan to tell us a little bit about his influences and the gear that has helped him to define his sound. He can play in a range of styles and genres, specialising in rock and groove-based styles such as funk, as well as in creating unorthodox sounds and textures with the use of effects pedals, citing such influences as Nile Rodgers, Paul Jackson Jr, The Edge, and Tom Morello. He tells us:

“I’ve always been a big fan of guitar pedals since early on in my playing. My first few years of playing guitar were spent 'reverse engineering' my favourite guitarists tones, working out what pedals they were using to get the sounds they were. Obviously that has become useful to me now as a session player, allowing me to quickly get the sound needed as I know what gear to use to get there. This interest has obviously stayed with me throughout my career and effects pedals have become a big part of my playing style and sound as a result.”

We asked Ryan what attracted him to the Hotone gear he’s using:

"The Hotone pedals are great for people with busy pedalboards like mine. Before if I needed a certain effect for a gig I'd have to swap some pedals around to get whatever I needed on the board, but the Hotone pedals are so small you can fit them in the gaps. Smaller pedals can sometimes compromise their quality, sound, or features to achieve their smaller size but the Hotone pedals sound great, are very flexible, and are built just as sturdily as any other pedal. On top of all this they're super affordable, I don't know how they do it!"

Check out some of Ryan’s no nonsense, “straight to the point” demo movies 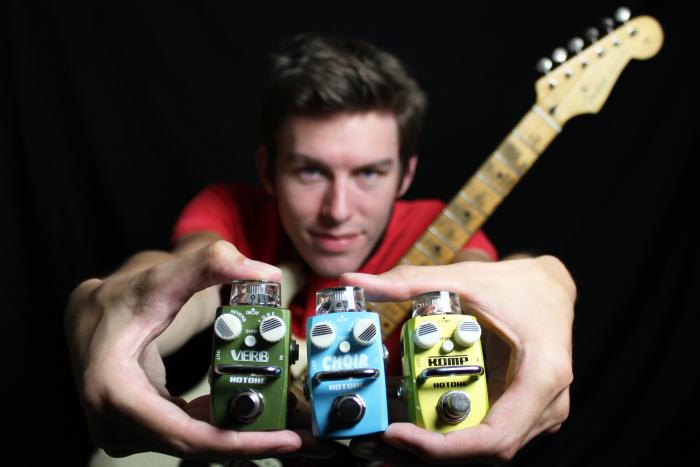 What does the Hotone Ampero sound like?
Read more
Jul, 2020

Frankie South: Surviving Lock-down as a Session Guitarist
Read more
We use cookies to ensure that we give you the best browsing experience possible. We'll assume that you are happy about that if you continue using this website or click 'read more' to see our Privacy Policy.
IT'S OK Read more