Not so long ago we had a call from Stephen Barlow, fresh from a session at the legendary Real World studios (Peter Gabriel's spectacular residential studio in Wilshire) where he’d been putting Strymon’s Timeline through its paces. Stephen has racked up a pretty impressive CV, having played with acts as diverse as Pixie Lott, Union J and Alexa Goddard to Dawn Penn, Kele le Roc and Wretch 32… We were keen to hear more…

Who are you working with at the moment?

I’ve been working with a variety of acts in recent months. I have done some studio and live stuff with Union J, acoustic gigs and TV work with Pixie Lott (depping for her M.D.) and some BBC radio stuff with a French artist called Sophie Delila. That’s all just in the last month so it’s thankfully been quite busy and varied. I have a full weekend of gigs with a pop group called Stooshe this weekend that I’m looking forward too. I also play with French pop star Christophe Willem (who has a huge following in France/Belgium) and an R&B artist called Delilah.

What kind of work do you get the most satisfaction out of?

I get a lot of satisfaction out of both gigs and studio stuff equally I’d say for different reasons. Recently I had a session at Real World Studios (Peter Gabriel’s studio in Wiltshire) where we were doing live band multitrack recordings of various covers for a project - and it was amazing to really get inside each of the tracks and work out how they made things sound a certain way.  When I’m recording new songs and new parts it always feels extremely creative to take them in a new direction using different instruments and sounds. I also do some studio work with a songwriter called Chris Young out of Chestnut Studios in London (it was he who got me in to help out on the Union J stuff he was working on). He is really good at directing musicians - so it’s a lot of fun working against the clock to get the tracking done.

In terms of live playing you can’t beat the energy of a crowd who are up for it! You get to really put all your energy into the music and it feels like a real team effort with the rest of the musicians/artists on stage with you.

Can you pick out a favourite gig / event (and why)?

There are many - I’ll give you one that sticks out though.  I was on tour with Christophe Willem and we played two shows in Brussels at a place called Ancienne Belgique, the 2nd of which was the finale for the whole six month tour.  I remember we did a surprise cover/mashup of ‘Seven Nation Army’ and ‘Music’ (White Stripes and Madonna respectively) and when I brought in the intro octave-down guitar riff of Seven Nation Army on my own with the crowd going mad was pretty cool! I think it felt like a great way to end the tour and everyone was there to have fun and the energy was amazing. It was such a great period for me in general so I’m glad the last gig was so memorable.

Who do you count among your musical influences?

Again, too many! I’ll list some artists who are particularly important off the top of my head:

If you could go back to any musical era what would it be?

Probably that early 70’s L.A. scene starting with The Eagles, Jackson Browne, James Taylor and Carly Simon etc… That must have been so exciting with so many great songs getting written.

What was your first guitar?

An Encore Strat copy - it was awful. To make it playable at the nut, you had to have it so that any note above the 11th fret would basically fret out. It didn’t have a truss rod and the neck was pretty bent… Bought it for £45 from a friend of the family’s boyfriend.

What guitar(s) are you playing at the moment?

My main guitar is a Fender Custom Shop ‘51 Nocaster (Telecaster) Reissue, which is my ‘burning building’ guitar.  I also use a Gibson ES-335 and a fender strat regularly. I use Martin acoustics pretty much exclusively and an Eastman Mandolin.

Tell us about your Timeline, what made you chose it?

It’s incredible.  So much flexibility and no compromise in sound quality.  I’ve been using two different delay sounds for every song since I got it!.  When playing to click/sequencing it’s great to be able to have all the tempos programmed into each patch so I don’t have to worry.  It’s the first DSP-based pedal I’ve used that doesn’t compromise my analogue signal chain at all. I’ve used others and they may sound good at times but leave me feeling a bit cold, especially when they are bypassed. I genuinely think it’s the best overall delay pedal around. If you can only have one delay pedal on your board then it’s a no brainer.

What else do you have on your pedalboard?

I keep changing things around, but at the moment I have: An SM Fuzz, Fulltone Clyde Deluxe Wah, Ernie Ball Volume, Paul Cochrane Timmy, Xotic BB Preamp, an early 80’s Ibanez Sonic Distortion (SD9), an 80's Boss CE-2 Chorus, Keeley Compressor and a Boss tuner! Not in that order though. I have a big box of pedals at home though that I’ve collected so I change things up depending on the gig. I think a Strymon Mobius might have to happen soon though! I tried a friend’s the other day and it sounded amazing.

Is there anything you have parted with that you really miss?

Not that I recall. I’m pretty bad at selling gear to be honest, so for me to move something on generally means I definitely have no further use for it.

Can you think of anything that really changed things for you, and why?

On electric guitar: (other than my Timeline - which has changed my approach to delay already) I would have to say: my aforementioned Telecaster, my Bogner Shiva head and my 1974 'silverface' Fender Deluxe Reverb amp.  That guitar will always feel like ‘home’ and those two amps are just an amazing bedrock for what I do. My Martin DC16 acoustic has done pretty much every acoustic gig I have ever done and my Eastman Mandolin has been so inspiring too.

Is there any advice you can offer to people starting out on their musical journeys?

Listen to everything you can (no matter the genre), meet as many musical people as you can, be nice, be open-minded and play music with as many people (who’ll let you) as you can!

Find out more about Strymon Timeline 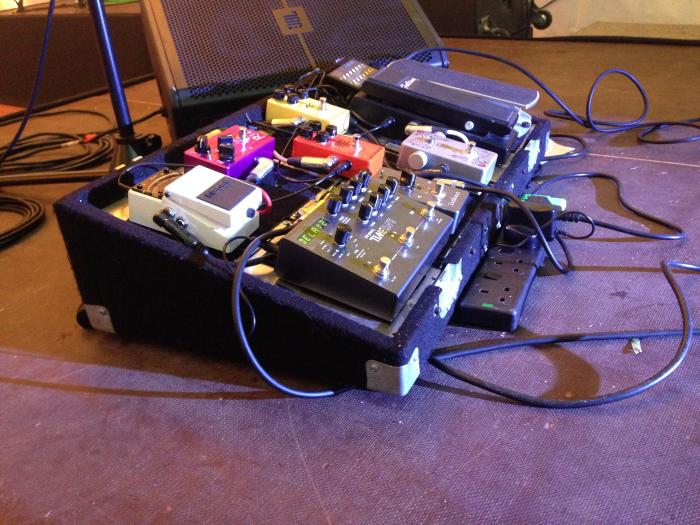