Gus Robertson is probably one of the busiest guys in rock and roll; he’s also an all-round nice guy with a solid gold humorous streak. He talks to Musicpsych about gigging with Paul Simonon, ditching his pedal board and playing his own after party…

You seem to be one of those musicians who really lives up to the rock and roll work ethic. You have multiple projects on the go including Rotten Hill Gang, Razorlight, and Carnival of Souls, with whom you’ve just released the Disguise the Limit EP. How do you balance it all?

Ha! For me, being a musician has always been about playing with musicians – that’s how you learn, that’s how you grow musically – so the idea of limiting oneself to one band is anathema to me. Obviously, Razorlight has been the most successful of the three groups and a rollercoaster ride in itself, but with Rotten Hill Gang, which is based in Mick Jones from The Clash’s studio, I have played with the likes of Mick, Paul Simonon (The Clash), Ian Hunter (Mott The Hoople) and reggae legend Tapper Zukie. Carnival of Souls was my first serious band – a real formative experience - we remain close friends and will always make music together – the EP is out and available at wearecarnivalofsouls.com. I guess I like to keep myself busy! Balancing it all can be tricky, but on the whole it works out. Just keep on your toes! When Razorlight played the Electric Ballroom earlier this year on the 10th anniversary of “Up All Night”, we had a Rotten Hill Gang gig booked on the same night. Thankfully, it was at The Record Club in Camden, which was literally just across the road from the Ballroom’s backstage. I ended up playing on one stage or another for about three hours that night. There’s nothing better than coming offstage from an hour and a half set and playing the afterparty!

What is the focus of your work at the moment?

With the festival season wrapped up, the focus with Razorlight is now on writing and recording. Johnny (Borrell) has been doing his solo project for the past year or so, which meant the record got put on hold for a bit, but we’re going to get back in the rehearsal room and the studio now. We’ve done a lot of writing already, but there’s always fresh ideas and I’m really looking forward to it all. As to Rotten Hill Gang, which is a mash-up of rock n roll and hip-hop, we’re releasing our first album on November 24th, featuring a bunch of special guests, so we’re currently putting the final touches to that. It’s back to the bunker for me I guess!

Do you breath a sigh of relief when festival season is over, or is the rest of the year just as punishing a schedule of recording sessions and gigs?

Well they’re two very different things – touring, or festivals, and the studio. After you’ve been out in the fields all summer and autumn falls, you’re ready to get in the studio and vice versa. I love them both. We keep gigging through the winter of course, but there’re so many festivals these days that the summer is usually non-stop travel – not that I’m complaining, I love the road! For me, as a musician, you’re always writing and playing - you’re getting to do what you love, so, though it may get tiring at times, I’d never complain cos I’m getting to do what I love - what I always wanted to do.

You’re not afraid to get involved with the playful side of rock and roll: no shortage of dressing up and stage antics, is this sense of fun transported through your song-writing too?

Certainly with Rotten Hill Gang it is – we’re actually releasing 3 albums over the next 6 months and one of them is based on movie theme tunes and has definitely got a tongue-in-cheek vibe to it. The band is a collective – drums, bass, 2 guitars, keys, DJ, 2 female vocals and a rapper - so it’s always maintained its sense of fun and good times. Another project I have possibly has the longest band name ever, also based around movie theme tunes: “Night of the Day of the Dawn of the Son of the Bride of the Return of the Revenge of the Terror of the Attack of the Evil Mutant Hellbound Flesh Eating Crawling Alien Zombified Sub-humanoid Living Dead, Part 2 – in shocking 3D”) after the film… Does that answer the question?! It’s always good to keep a sense of humour with music – I love Ian Dury, Ween XXXXX

You seem to be able to segue between musical styles with ease, do you find yourself using different gear with different bands and solo work?

More out of necessity than anything else. My gear may be out in Europe from a Razorlight show – or at least on the way back - while I’m back in the UK for an R.H.G show, so I do have a couple of rigs. I try to keep my guitars, or at least a guitar with me on the whole, but with amps and pedal-boards it’s not so easy. Palmer gave me one of their DREI heads, which I have used a lot for R.H.G gigs because of this – it’s a great amp with three different valve housings in it and allows you to blend their mix and has been useful in the studio too. The Razorlight gigs require larger wattage amps too – bigger stages – which would be too loud for some of my other projects’ shows – finding the sweet spot from a 50 or 100 watt rig is much easier in a venue that holds 1000s than 100s – well it’s actually just not possible in smaller venues. In terms of pedal-boards, I have my main rig which I try to keep as multi-purpose as possible so I can use it for anything, but I also have a different rig for when I don’t have my board.

What is currently on your pedal board?

Nothing! Summer’s over and it’s the first chance I’ve had since May to re-address things. I’m doing a complete overhaul, trying out some new ways of doing things. Each tour, even each gig, seems to teach you more about what you need, what works. It’s always best to keep it as simple as possible – the live experience is totally engaging and I’d rather concentrate on my playing than my tap-dancing! I’m going to try out the G2 from Gig Rig – I haven’t got it yet, but it looks great – multi-functional, but can be kept as simple as you want, yet still have go-to switches for key settings at the stomp of one switch. In terms of pedals, I have had to sacrifice some of my favourite (and larger) analogue pedals (which I love) in favour of keeping the board small, but, for example, the Eventide H9 offers a huge range of tones and FX (all the Eventide factor pedals) in one small box, which can be triggered by the G2. I’m really enjoying the Strymon Timeline too and planning on running of those with a bunch of my favourite drive/distortion pedals – guess we’ll watch this space! Analogue pedals are brilliant and a go-to in the studio, but can be tricky when it comes to live application and, with the various projects I have on the go, I’m ready for whatever’s needed.

How are you getting on with the Hotone amp heads? In what situations do you find them most useful? And tell us a bit about Grass and Komp, what made you choose them?

The Hotone stuff is really great – simple, small and great. When I first tried them, I was looking at them as possible space-saving solutions to keep my board as small as possible, but that’s not how I’ve ended up using them, though certainly they do provide a solution there. For me, both the amp heads and speakers and the pedals are brilliant for writing on the go. For example, I’m heading out to Europe next week for a week’s writing. I don’t want to take my gear with me – it would, in fact, be nigh impossible – but I need to be able to write and record at a decent level. Laptops are perfect recording notepads, but don’t give you the tone and feel for an electric guitar sound. Armed with the Hotone amp head, speaker and a few of the pedals – all of which fits into a small bag – I can reproduce great tones that I can then go back and translate into my main setup. Really, I can’t express how good they are for this – so compact and yet sound great. I’ve only tried the British Invasion head so far, but I’m loving it, and hoping to combine it in stereo with a Purple Wind. Those two with the Grass and Komp running through the Timeline and I’m set to write, write, write. The Grass is an amazingly dimensional drive pedal – rivals some of the greats.

What can we look forward to in the future? Can you share any secrets with us?

The Great Brain Robbery - the night I run and am just about to re-launch at Sketch in the West End - debauched rock ‘n’ roll mayhem is the key! I put on up & coming acts alongside the established - I’ve had Ronnie Wood play, Mick’s done it, Florence, Johnny – there’s always a secret guest to throw some shapes n rock your world. It starts up on Thursday 16th October and runs fortnightly. Ssssshhhh… 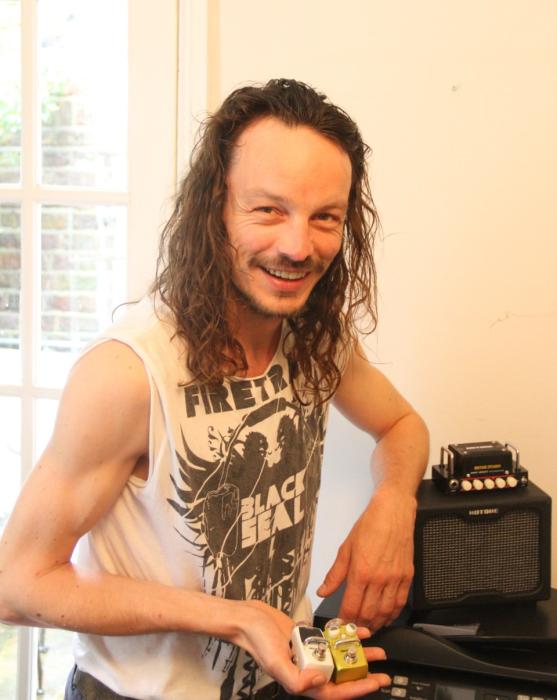